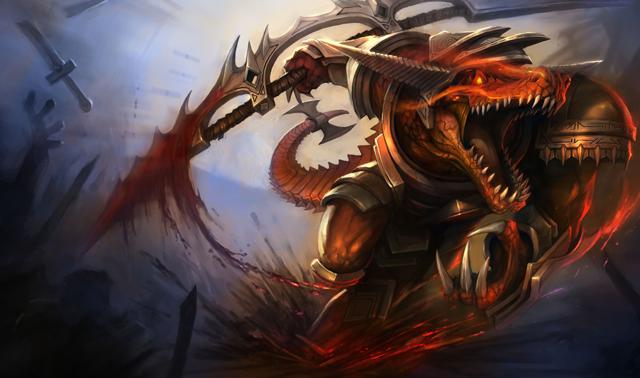 Skins in League of Legends are an interesting animal. They’re the only thing in the game that you can only buy with real money. That means you have to be careful about what you buy.

I do buy a lot of skins, because they make the game more enjoyable for me, but I try to keep it to one skin per champion. That means you have to know which one is the best, so I’m here to tell you.

It was a super close call but I have to go with Bloodfury Renekton.

The red scales against the metal armor makes for the most badass look. The ultimate animation is pretty hot too.

The Rest of the Renekton Skins

You can check out all the skins here.

It was so close between Bloodfury and Scorched Earth that they both get their pictures at the top of the post as a consolation prize. I think Bloodfury’s character model is much cooler but the ability animations for Scorched Earth are better, especially the ultimate. You can’t go wrong with this either.

The base skin isn’t bad, because crocodiles are pretty awesome as is.

I actually really like Galactic Renekton because I find the story behind Nasus and Renekton pretty cool. If you’re into the story this could be a nice choice.

Rune Wars Renekton is just kind of blah to me, I’d almost rather have the base skin.

Finally, Pool Party Renekton is my least favorite of the pool party skins which I love as a whole. Using the lifeguard flotation device in place of his blade is clever but it’s just not as funny as the others. He does have a good recall animation though.

That’s Renekton but who would you like to see next? Let me know in the comments or tell me what you think of Renekton’s skins.

One thought on “League of Legends Best Champion Skins: Renekton”